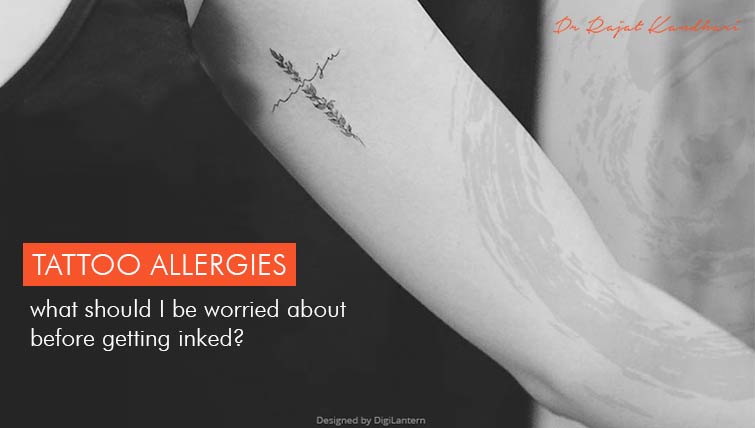 Tattoo Allergies – What Should I Be Worried About Before Getting Inked?


In Tahiti the word ‘Tatau’ or Tattoo is translated as “drawing or decorating the skin.” For the Maori, facial tattoos denoted the class, profession, social status and family of origin, whereas the Greeks and Romans used them to brand criminals and slaves. The early Christians used small body tattoos representing a cross, a lamb or a fish as signs of recognition. Since then tattoos have come a long way. Today ‘tattoo culture’ has attained mainstream status be it because of popular TV shows such as “Miami Ink” or because of the millennial generation wanting to look “with it”, tattoos are here to stay.

With this increasing trend of getting inked, comes its share of allergic reactions. So whether it a henna based, temporary tattoo that you’re getting while holidaying in an exotic location or a permanent tattoo displaying your love for your significant other, you should be prepared for the baggage that may come with it.

Tattoo artists use many compounds to create tattoo pigment and several allergic reactions can occur as a result of these additives. Professional and amateur tattoos differ in the composition of ink used in them and also the way the tattoo artist inks you. On one hand we have the amateur tattoos which use carbon particles compiled from cigarette ash, pencil particles, graphite, or inks, such as India ink, which is often pricked into your skin with any pointed object, whereas on the other hand professional artists use organic dyes mixed with insoluble metallic elements, in order to achieve the desired color and use an electric needle to introduce the ink particles at the right depth in your skin. Scaling and eczematous reaction seen in a professional tattoo

New color mixtures created by professional artists may result in an increased potential to develop allergies and difficulty in identifying the specific allergen. Also trending hugely are ‘henna based’ tattoos which are not really true tattoos but produce a tattoo-like appearance that lasts for a few days. These ‘pseudo tattoos’ contain high concentrations of contact allergen paraphenylenediamine (PPD), which is also present in many hair dyes. Allergic reaction to ‘Henna’ based tattoos – limited to the tattoo area

The pigments commonly used by most tattoo artists include:

Allergic reactions experienced are mostly due to sensitivity to one of the pigments used in the tattoo, and unfortunately there is no way to know who is or is not susceptible to developing these allergies. The safest bet would be to probably go for a conventional ‘blue black’ tattoo rather than getting a rainbow. Few inks, such as red mercuric-based ink are more notorious to cause allergic reactions, although many of these cinnabar containing red inks are now being replaced by vegetable dyes. Allergic reaction limited to the red pigment in the tattoo

Red tattoos (Mercury/Cinnabar) – The reaction has tendency to become generalized although in most cases subsides spontaneously. The tattoo reaction in rare instances may be accompanied by erosions of the oral mucosa in contact with amalgam based dental fillings.
Green tattoos (Chrome) – The green areas of the tattoo are affected and the person may also be allergic to cement as potassium dichromate primarily present in cement is the sensitizing agent.
Blue tattoos (Cobalt) – The light-blue areas are affected and maybe accompanied with inflammation in the eye.
Purple tattoos (Manganese) and Black tattoos (carbon) – less known to cause allergic reactions although may occur in rare instances.
Light-induced allergic reactions – Red and yellow tattoos in particular have a tendency to develop redness and swelling only on exposure to sunlight. This is presumed to be due to the photo-conducting properties of some of the pigments such as cadmium although the exact reason is unclear.

What should I do if I get these reactions?
If you do end up getting symptoms suggestive of an allergic reaction it’s wise to fix an appointment with your skin specialist immediately. The treatment for these reactions essentially includes topical corticosteroid creams or intralesional steroids (steroid given into the area affected). Further, severe reactions may warrant complete removal of the foreign pigment which at times can even require surgical removal and grafting in the affected area. Lasers for removal of the pigmented tattoos have variable success rates.

Previous post
What Is The Right Time To Start Anti-wrinkle Injections?
Next post
5 Key Benefits of Laser Toning