COVID-19 Update
COVID-19 Update
Our clinics are now open from 10 am to 2 pm (Monday-Saturday) and Online Consultations are still available for those who can not visit the clinic physically.
info@drkandhariclinic.com
011-46413705,011-46413714
Technology Special Offers Veya Aesthetics Know Your Face 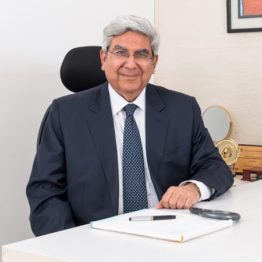 Dr Sanjiv Kandhari, having thirty nine years of experience in practice and teaching, is currently considered one of the best dermatologists not only in New Delhi, but also in India. He completed his MD from the coveted All India Institute of Medical Sciences (AIIMS) and subsequently worked in various hospitals like Holy Family, St. Stephens, ESI, Northern–Railway , Batra Hospital, Escorts Heart Hospital, Vimhans and Orthonova apart from his private practice.

Dr Sanjiv Kandhari has envisioned giving top service to his patients be it in general dermatology, aesthetic dermatology . At Dr Kandhari’s Skin & Dental Clinic we follow this very motto. “Our patient comes before anything else, and we strive to give them the best possible service in terms of clinical diagnosis, treatment, services, comfort and hygiene”, says Dr Kandhari.

Dr Sanjiv takes keen interest in orations and has been an invited speaker at various national and international conferences. He is a member of special interest group (SIG) on urticaria who have formulated the Indian consensus guidelines on Urticaria 2012 and has been part of EAACI/ GALEN/ EDF/ WAO guidelines in management of urticaria and allergy in 2009. He was the chairman of the Derma Trends Scientific Advisory board.

He has been the President (1992-93), Vice–President (1987-88) & Secretary (1986-87) of the Indian Association of Dermatology, Venereology &Leprosy (DSB) and the Joint Secretary of the Organizing Committee of the International Society of Dermatology Conference held at New Delhi 1994. He was the Chief Organizing Chairperson for the DERMACON AND SARC summit in 2005 and the president of AESTHETICS (2009 – 2016).